Alex Roissetter joined the Army at the age of sixteen and did his basic training at Arbourfield Army Technical Foundation College. In 2004 he finished trade training at Blandford, Dorset and the following year was posted to 2 Signal Regiment, 214 Signal Squadron, Yorkshire.

Alex saw tours of duty in Qatar and Afghanistan before being posted to 7 Armoured Brigade (The Desert Rats), 207 Signal Squadron. This was followed by a tour to Iraq, and then in 2009 he was promoted to Lance Corporal.

Alex has been writing poetry since his second tour of duty, in Afghanistan. He is a moderator of www.forcespoetry.com, part of FLOW for All (the Forces Literary Organisation Worldwide), a not-for-profit organisation dedicated to offering assistance to those who have suffered from the effects of war, especially the suffering shared by servicemen and women, their relatives and their friends. 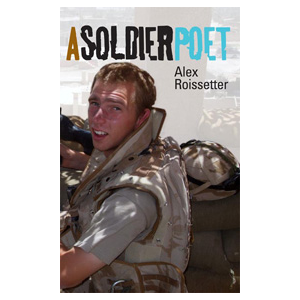