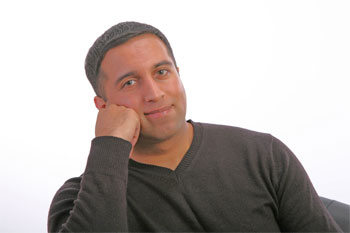 "Boxing is in my blood, in my veins and it is a sport which has taught me so much in terms of grasping that sometimes all elusive work-life balance. Overall confidence, self-discipline, self-respect, mental and physical well-being and much more has been obtained through this scientific noble art. Most importantly, it has given me a tremendous level of health and fitness which in my view is second to none compared with the "blinding illusion" of obtaining extreme financial wealth while seeking true happiness. Contentment, fulfillment and happiness is a state of the heart and mind, not the status of one's bank balance...remember this and you will be 'Humble in the Jungle' of life."

I was barely nine months old when Mohammad Ali outclassed George Foreman with his sweet scientific strategic style rather than sheer brutal force in the historic battle famously referred to as "Rumble in the Jungle" in October 1974. After watching that fight several times at the tender age of only nine, I felt the passion and desire to train and exercise to be like them, a champion boxer. I rushed to the local Argos store and bought for myself a pair of red 8 Oz boxing gloves and a basic punch bag. As soon as I reached back home I headed towards the basement where I hammered a six inch nail into the wall, filled the bag with sand and hung it on. I switched on the radio loud and then began pounding the bag with pure focus, dedication, adrenaline and euphoric happiness. The sweat trickled down my forehead, igniting the fire in my belly and confirming from that moment onwards what I wanted to be doing for the rest of my life.

Alas it was not meant to be. The gateway to dreams closed on its own and after a decent record in the amateur boxing circuit in UK, I integrated and became part of the rat race and opted for a more "sober" choice of vocation in the business world. That's where the similarity ends between the lead character Ronnie and myself in my first novel The Last Champion. While I was enjoying my stint as General Manager in a premier nightclub in amongst the hustle and bustle of Leicester Square, I saw the multitudinous facade of life wade past me every single day. The strobe lights, the pulsating music, desire on the dance floor and undying matrix of human relationships unfolding on an unprecedented regularity right before my eyes, finally provoked me into becoming a story teller.

At the reception of the club, a theatre agent had hired the space selling tickets for the famous Theatrical West End shows. One fine day as the evening haze was merging with the glamour of the dusky night an idea struck me hard. I wanted to write a play that could be staged on the biggest of stages all around the world having a universal message of the triumph of human spirit against all odds. Having thought about the overall synopsis and idea, I realized that I must write my thoughts down and create a general sketch of the beginning, middle and end. This was in the year 2000. As I started penning my thoughts I was taken by surprise when the words flowed like a stream of thoughts gushing through the unseen terrain of my inner world. Having written several pages I realized that my style of writing suited the genre of a Novel more than a Play. Today as I begin to strategically plan my book launch of The Last Champion, it has been a total exhilarating and energizing experience of creating some pulsating characters, their trials-n-tribulations, discovering my Asian roots in a fresh light and re-living my passion for my all time favorite sport; Heavyweight Boxing. I am sure all you lovely people out there, shall enjoy reading my first creation as much as I have enjoyed writing it. Further more, very soon I shall also be working on making The Last Champion into a memorable World-Wide feature film that will surely win the hearts and minds of many people across the globe. So, Ladies and Gentlemen, Let's Get Ready To TUUMBLE!

The Last Champion Novel:First ASIAN in the World to Accomplish this Feat! -...

THE LAST CHAMPION: BOOK COVER ONLY