Brandon J. Hall was born October 11, 1981 in Detroit Michigan.  As a child he developed a passion for art.     Be it poetry, drawing, sculpting, writing, or painting, Brandon was enthusiastic about it all.  At Gabriel Richard Elementary School, he was awarded the honor of being one of the few students selected to have a painting showcased at the Detroit Institute of Arts.  From there he began writing and drawing his own comic books as a hobby.  In middle school, Brandon continued to showcase his artistic talents and was allowed to design the School Mascot.  It was in high school where his true passion for writing would come to the surface.

He developed a flare for poetry.  Brandon’s freshman year at Benjamin Oliver Davis marked the first of his many publications in the school magazine.  For the four years he attended his art and poetry was showcased regularly.  He had the honor of having a poem published in a booklet at the Detroit Institute of Arts.  The visit from the past as well as offers to have his poems published in books of assorted poetry gave Brandon the confidence to pursue his passions.  In the mean time, he was writing books of his own.  Learning to develop characters and depth, Brandon became involved with his works of fiction.

It was his senior year where he pulled out the drawing pad again and designed the Davis letterman jacket; a design that would be used years after he’s departed from the educational institution.  It wasn’t until later in his life where Brandon dealt with his own personal trials coming from a failed marriage and a broken family, where he birthed the idea for “Reflections: The Chronicles of a Man Scorned”; A work of fiction that had loose similarities to his own life.  After receiving positive feedback from his project, Brandon became confident that he could entertain many people while influencing the way they look at relationships. 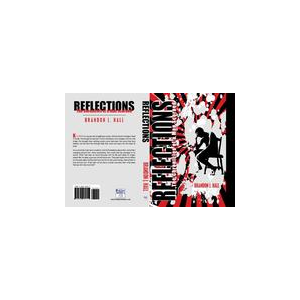 Reflections-The Chronicles of a Man Scorned