Over the last thirty-seven years, Danton Steele has been asked often why he enjoys living in the developing world.  His response is always same.  “Hell I grew up in the 50s and 60s in a developing country – the State of Louisiana.”  Then Louisiana was known as much for its corrupt politicians as it was for its food and its music.

Steele, a pen name, began his international career in the Peace Corps in Botswana in 1973.  He was thirty-five and on a five-year assignment in the Philippines for a major American bank when he wrote The Marcos Money in the early-80s.  He experienced most of the scenes and situations portrayed in the book, including devaluation, debt rescheduling, and mayhem following the murder of Ninoy Aquino.  He knew most of the characters in the book though many of the names have been changed and many of the roles interchanged.  His central plot, though tempting and laudable, is pure fiction.

Following the Philippines, Danton lived in Sri Lanka, South Africa, Hawaii, The Gambia, Jamaica, and Jordan implementing international development projects of various kinds. He traveled more than forty times to Kashmir, were he always stayed with Gulam’s family on the New Golden Fleece.  In Jordan he converted this book into a screenplay entitled “The Marcos Money”, and he penned a screenplay entitled “The Red-Dead”, another fast-paced thriller of love, honor killing, and geologic upheaval of epic proportions.  He currently lives in Pakistan where he is working on a third screenplay entitled “Osama’s Head”.

Donate to education in developing areas of the world at

Write the author at dantonsteele@gmail.com 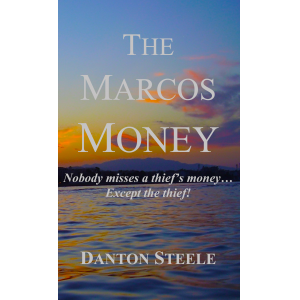