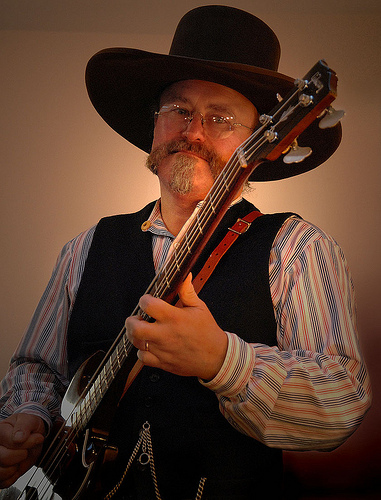 By the time I was 16 the British Blues Boom was in full swing and I was the vocalist of Savage Cabbage – a Blues band made up of Ron Larkin (lead-guitar), Steve Bruce (lead-bass), and Jack Hackman (percussion). I... also played harp and rhythm-bass. Savage Cabbage lasted two years (1968—1970) and died with the demise of the British Blues Boom and the deaths of Ron and Steve. Ron Larkin was a genius and I consider myself lucky to have met him and even luckier to have shared a stage with him. I will not compare him—because no one can hear him now—and anything grandiose I might say would not be intended to reflect on me. Steve Bruce was a brilliant bass player whose virtuosity of 6 String Hagstrom was breathtaking – especially when he played slide. Jack Hackman was a wild man on drums and a good fellow all round. He died some years later in a hang gliding accident – so I am all the remains of the Blues band that boomed at the end of the British Blues Boom.

Frank Schubert was my name—as a lyricist and solo performer—between ’68 and ’72. I chose that name because my maternal grandmother was the niece of Franz Schubert. I enjoyed the musical association – even though my lyrics drew precious little from that fine composer. I was always fond of whimsy. It was whimsical to play a gig on a Sunday night – as people were not likely to attend. The hire of the hall however, was negligible – and the lads were eager to play. Fortunately—when the time came to insert jack-plugs and turn on the amplifiers—the hall was packed to capacity. We had a welcoming audience. People had begun to follow us as we played different venues. These were people who were still keen to hear Blues. The genius lead player, two bass line-up, and insane baritone vocalist had begun to get people’s attention. These people knew just how exceptional Ron and Steve were – and, who forgave Jack for not being Ginger Baker. We launched in with ‘Crossroads’ – and played it pretty much as Robert Johnson would have played it – if he’d lived to buy a Fender Telecaster. It was as different from Eric Clapton’s Cream rendition as we could make it: searingly slow, half an octave lower, and shot through with Ron’s gigantically poignant arpeggios. We finished with ‘Spoonful’ as a long encore; after which I closed as I always did:

And now I play with a changing line-up of friends called Savage Cabbage when they play along with me. We’re working on putting some CDs together of my old songs. There are about 30 of them and most were never put to melody. It may take a few years – but we’re committed to the task. In the meantime we’ll be playing here and there in ad hoc combinations – as it suits us. 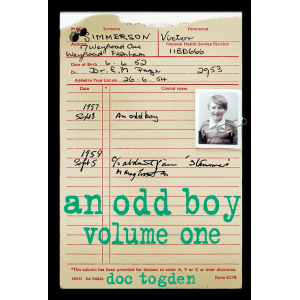 an odd boy - volume one

Could you tell us about your background?

I was born in Hannover in 1952 – to a German mother and English father, from . My mother was Renate Schubert – the grand-niece of Franz Schubert. She came from a fairly well-to-do family which become horribly reduced in circumstances due to their opposition to Hitler. My grandmother Clara Schubert had to escape to until the end of WWII due to the aid she gave to Jewish families. My father was a working class man whose parents hailed from a farming background but moved to . My father left school at 14 and became a dock worker. He then joined the Army at 15 by misrepresenting his age – and went on to become a major in the Royal Engineers.  I was raised in Farnham—Surrey—where I attended . I was the vocalist for the Savage Cabbage Blues Band from 1968 to 1970  and played solo Delta Blues around the home Counties from 1970 to 1972.  From 1972 to 1975 I took an Illustration degree at where I received a 1st class honours degree.  From 1975 to 1981 I travelled back and forth to the where I studied Vajrayana Buddhism.   In 1981 I settled permanently in . I married Caroline Tresise – a Macmillan nurse who took her degree in . She was raised in Berkshire but—like me—prefers to the Home Counties. We have two children—Robert E Lee Togden aged 15 and Ræchel Renate Tresise Togden aged 8—who, like us, play musical instruments, ride horses, and enjoy reading. Caroline and I are Vajrayana Buddhist teachers – and our lives mainly involve writing books, travelling, and teaching in and the where we have students.

Could you give a brief description of your book ‘an odd boy’ Volume I?

It’s a monothematic memoire of the Arts between 1957 and 1975 – written as a novel with dialogue.  Volume I covers the years 1957 to 1968 and concentrates mostly on poetry and the formation of the Savage Cabbage Blues Band. There’s a thread of romance that runs through the book – because I see romance as inseparable form Art. You have to be in love with colour, sound, shape and form to be an artist – and so romantic love naturally reflects the dimension of creativity.  In a way the book is a description of a young lad’s rebellion against pedestrian normality.

What was the hardest part of writing ‘an odd boy’?

Knowing where to stop. As it is . . .  the four volumes of ‘an odd boy’ runs to little short of Tolstoy’s ‘War and Peace’. There are so many episodes that had to remain unwritten.  There were always many fascinating facts I had to omit. I was given the good advice to ‘kill the kittens’ but doing so was sometimes painful.   ‘Kittens’ are the aspects of the book you love – but which detract from the flow and dynamism of the book.

Shakespeare and the Beat Poets. That’s my immediate answer – and it probably deliberately provocative.  It’s hard to say which books have had the greatest influence – because I have been influenced by so many authors.  Historical novels. I particularly love Jane Austen – for her wit and irony.  I have great respect for Patrick O’Brien. His nineteen volume sea faring odyssey set during the Napoleonic Wars is a remarkable tour de force. It’s also delightfully informative on subjects as divergent as 18th Century psychology and medicine to anthropology and sociology. I suppose ‘an odd boy’ attempts to be informative in similar style vis-à-vis Blues and the Arts.

Briefly, what have you done to market ‘an odd boy’?

Very little myself – it was all arranged by my marvellous publishers. they began with a Facebook launch, which involved two hours question-answering in relation to ‘an odd boy’. The questions were mainly based on extracts that I’d been posting on FaceBook over the last year.  The extracts were culled from the website dedicated to ‘an odd boy’ we’ve received some delightful endorsements from international Blues performers such as Sugar Blue,  Deborah Magone, and CJ Tozer.  I’ve been happy to discover that ‘an odd boy’ now has 5 star reviews on Amazon, Lulu, and other websites. We held a book signing evening in in November which was well attended.  The audience asked intelligent questions about the meaning of Art and of being an Artist – and ‘an odd boy’ has also been accepted as an entrant in the Wales Book of the Year Award 2012.

Enjoying my family – there’s laughter and fun in our home. We play and listen to music, read, paint – and we all ride horses. We also watch movies – mainly period drama. Of course my writing time extends beyond literature to answering email from our students and composing periodic epistles for the same.  I travel to the to teach twice a year – and when I am not in the I like to spend as much time at home as possible.  I’m a home body and I love my home. I have never enjoyed travel a great deal – even though I’ve spent a fair few years in the . I never travel for the sake of travel. I enjoy being wherever I go – but apart from the wonderful people I meet, I’d rather be at home.

Yes - there is still editing work to carry out on the next three volumes of ‘an odd boy’. After writing ‘an odd boy’ I wrote ‘wisdom eccentrics’ a book about my time in the .  It was writing ‘an odd boy’ that helped me write ‘wisdom eccentrics’ – but having written ‘wisdom eccentrics’ I saw immediately how the language in ‘an odd boy’ could be improved. It is important to me that the perfection of the craft never reaches stasis.   I always have books on the back burner – so as soon as there is time I shall commence work with completing my anthology of poetry.  The poetry is there but I need to write a fairly lengthy anecdotal introduction.  I’ve never published poetry before because I’ve never reached the point at which I could consider the poems to be finished. This has meant re-writing ad nauseam. I have revised most of them a score of times. Every few years I move into a poetry phase and write a handful of pieces. When I do so, I usually take the opportunity to revise older works. There will be two poetry books. One will be an anthology of all my past work entitled ‘Ravings of a Mild Mannered maniac’ – and the other will be a narrative written in cantos—each comprised of five 9-line verses—entitled ‘. . . and so’.  Then – there’s an off-the-wall project – a recipe book called ‘The Tiger’s Table’.  The gustatory olfactory senses are mainly neglected when people speak of the Arts – and Caroline and I would like to change that.  This is something of a long term project because nothing I cook makes references to measurements or qualities.  This means we shall have to cook everything and take notes of what we’d need to tell the reader with respect to reproducing our outrageous gastronomic exploits . . .  It will be the recipe book that puts the ‘hell’ in health and the ‘die’ in diet . . .