Frances Pawley was born in Leicester in 1948 and writing from an early age.  Her first payment for writing came at 13 when she received the princely sum of 10/- (50p) for a short story.  Although winning a number of competitions she was never able to get into the 'adult' market with a novel.
In 1998 she entered a writing competition run by The Academy of Children's Writers with a story called 'Tommy's Magic Plot', about three children who devise a way of growing square tomatoes.  She won Third Prize for that story out of nearly 3,000 entries, and then decided that the children's market might just be the genre for her.
Using the same three characters and increasing their ages, she decided to write Merlin's Crystal in 1999/2000.  She then went on to write Secrets of Manor Parsley in 2001/2 and Old Ghost of Manor Parsley in 2006.
All three of these books are combined into this one book to tell the complete story.
Frances previously lived in Wiltshire, Germany and Cornwall and now lives in a beautiful area of Leicestershire which she describes as 'Paradise', with her husband Andrew and dog Tess (whom she calls Tuppence). 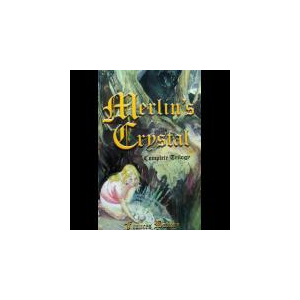