Irv St. Auburn Rowe was born at home in Spanish Town, St. Catherine, Jamaica in the twilight of a Friday afternoon, on April 25, 1971, to Ainsley and Carmen Rowe. He spent his formative years growing up in a tiny rural community with his grandparents, Rueben and Elsie Gibbs, after his parents’ divorce. His grandmother was a devout Seventh Day Adventist and Irv and his brothers, ...Ian and Dwayne, were required to go to church every Saturday unless “Gibsie” (as they affectionately called their grandmother) was sick—which was very rare. They had no vehicle and they sometimes had to walk seven miles round-trip to and from church. They also had to go to just about every crusades or major religious gathering of believers and new converts, within the area. Irv credits this experience, and his grandparents and mother, for instilling much of the values and principles that guide his life today.

Irv discovered his love and ability to write at a very young age. He grew up reading the Hardy Boys and always tried creating characters of his own. He also had the ability to draw, which he coupled with his writing, to produce rudimentary comic stories. While at Calabar High School, his physics teacher confiscated an incomplete salacious novel he was working on. It was never returned, and he has always wondered what that teacher did with it. There have been many more incomplete drafts over the years.

Irv never took writing seriously because it came too easy to him. Instead, he wanted to do something that challenged him. However, as fate would have it, one of his first jobs out of high school was working as a writer at a magazine company. He did other stints in journalism, public relations, marketing, community organizing, and show promotions, before emigrating to the U.S. in 2000. Irv, again turned his back on writing, and pursued a degree program in restaurant and hotel management, which he never completed. Besides briefly editing a church newsletter, Irv did not do any serious writing. He eventually joined the Army in 2003 and did convoy escort operations during the early years of the Iraqi war. He is currently a senior noncommissioned officer serving on active duty.

In 2009, Irv finally decided to formally develop his writing talent; he started a bachelor’s degree program in communication. His objective was to finish a book and the degree at the same time. He completed his degree in 2013 and Wild Orchid was completed in 2014. He is currently working on an MBA. Maybe another book will follow the completion of that degree. The moral of Irv’s life story is: do not run away from your god-given talents. Instead, recognize, embrace, and refine them; and use them to enrich the lives of others. 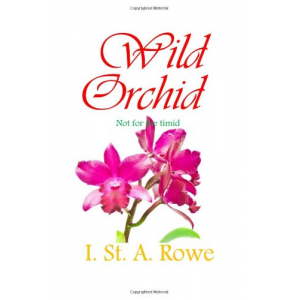 Wild Orchid: Not for the timid