Jamie Eubanks is an avid martial artist and the world's okayest bass player. She can be found at www.Facebook.com/JAEubanks1 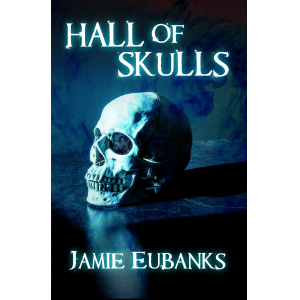 1. Could you tell us a little bit about yourself?
My first career was that of an entertainer, playing bass and singing in various night clubs.  Presently, in addition to writing, I own and operate a small private investigations company.

2. Describe your book HIDDEN DOORS, SECRET ROOMS in 30 words or less.
HDSR is a paranormal suspense with a dash of romance. We have a woman and child on the run, a reluctant hero, paranormal influence, and a handful of bad guys.
3. What was the hardest part of writing your book?
Once the characters were firmly in place, the story all but wrote itself.  It's what comes after - the editing - that I find most tedious.

4. What books have had the greatest influence on you?
Anything and everything by Dean Koontz. His characters are so well-defined, so realistic. That's been my goal: to create characters so genuine that, when you approach the last page of that final chapter, you feel as though you're about to leave a part of yourself behind with them.

5. Briefly share with us what you do to market your book?
As an indie writer, social networking has been a great resource. I love having the interaction with the readers, and I've made some good friends because of it. I've also had a few book signing events.

6. How do you spend your time when you are not writing?
In addition to writing, I'm a licensed private investigator. I also spend a lot of time at the karate dojo, where I usually train five days a week and help others with their training. And Yogurtland!

7. What are you working on next?
There are a few paranormal suspense stories I've been working on. The first drafts are complete. So now the tedious part - the editing - begins.