My father, Peter Rimmer, was born in London, England, and grew up in the south of the city where he went to school. After the Second World War and at aged 18, Peter joined the Royal Air Force, reaching the rank of Pilot Officer before he was 19. A great achievement.  Then at the end of his National Service and with the optimism of youth, my father sailed for Africa to grow tobacco in what was then Rhodesia, and the odyssey of his life began.

The years went by and he found himself in Johannesburg founding an insurance brokering company. Over 2% of the companies listed on the Johannesburg Stock Exchange were clients of Rimmer Associates. He opened companies in the United States of America, Australia and Hong Kong and travelled extensively between the branches.

His passion has always been writing books which he started doing at a very early age, though running a business was a driving force too and this you will see as a common thread throughout his books.  By the 1990's he had written several novels about Africa and got the break when Cry of the Fish Eagle was first published by HarperCollins, Zimbabwe.  It was a bestseller which was followed up with the release of Vultures in the Wind.  Unfortunately, during this time, Zimbabwe was going through its struggles and the books did not get their just international recognition.

My father, having retired early in his business career, continues his love of writing, and lives as a recluse in his beloved Africa, leaving me, his daughter with the responsibility of promoting his books.   He continues to write his beautiful books in his study which overlooks some of Africa's stunning and dramatic scenery. What more could anyone want to write books?

I do hope, like me, that once you start reading his books, you too will fall in love with Africa and will want to read each new release of Peter Rimmer's books - his parting comments to me at my last visit were "All I want is people to enjoy my books". 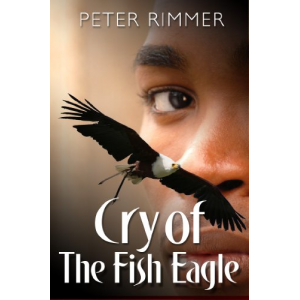 Cry of the Fish Eagle