Given Robert Allan Young’s stature as one of today’s most compelling and sought after Christian fiction writers, it’s easy to let the reviews and numbers overshadow the essential reason why he’s come so far in the first place. As he says with typical understatement, “I’m just someone who gets an idea or a story in his head, and I have to write it down, and I have to get them out. I’m just lucky enough that I may be able to make it my life’s work.”

For Robert, it’s never been about a popularity contest or a game of trying to write a financially successful bestseller. It’s about the message in each one of his works. And for Robert, it all comes back to the creative source. “Sometimes I have trouble separating the idea of what I do versus real life. I see a story or an idea in almost everything. Most of the time there’s joy and love but like real life, there’s also so much pain and hurt in this world. But if I can write something and make a reader feel something they’ve never before felt or maybe even just stop and think, then its all worthwhile. It's something that I can do and it just makes sense to me.”

Making sense of his inspiration is what Robert does at an exceptionally high level. “The inspiration is the part that’s completely magical and I really have no control over it. The inspiration is when you’re walking by someone who is doing an everyday, mundane task and you ask yourself ‘what if’. And then the story starts to form in your mind. I can actually picture it all unfold. Then I realize that this story doesn’t exist yet, that it could be a message that someone may need to read and experience. But that’s also a process that I can’t be responsible for because the minute I start to claim ownership of it, I lose it. Quincy Jones once said, ‘The moment that success leads you to say, “I’ll take it from here, God,” that’s when God walks out of the room.’”

And as for the craft, Robert is quite passionate about how that all comes about. “I have those moments when I feel myself right there with the characters and all I have to do is take notes. But when that feeling stops, I have to walk away at some point, but I also have to go back because now it becomes a responsibility. I have to step back and say this is where the inspiration took me, now what was it I was trying to say, where was I going with this story? It’s an unbelievable process that I find satisfying when its all done. But then before I know it, something else comes along to inspire me and the whole process starts all over again. So I keep trying to get that feeling again, that high off of creating, that place that carries me from a blank page where nothing existed to eventually a story that moves people. That’s where the magic is.”

That gift of turning the personal into a fictional story or character has been a hallmark of Robert’s work from the very start. “If I can take a specific moment in my life and write about how that moment made me feel though a character that I’ve created, all of a sudden I’m in a territory where a lot of people can understand. If I can write a chapter about Nicholai Delgado contemplating taking his own life, or Brian LeClair wanting to run away, or two people who love each other in such a way that nothing else in the world matters and someone else can actually feel those same feelings, then I’ve done it. If I can take a reader who’s delving in the depths of heartache and loneliness and bring them to a place where they can experience that one true love that may have been lost, then its all worth it. But my real goal is to get them closer to God on a deeper level than they were before they turned the first page. And there’s no better feeling in the world when I can do that with God’s help.”

And it’s a world Young views with incredible optimism and passion, despite the occasionally sad paragraph or chapter. “I’m not a sad person and I don’t get any satisfaction in heartache and despair. There’s always hopefulness in anything I write. There has to be; it’s the hopeful part that makes me want to share with people. It’s the hopeful part that says there can be healing in the pain and if I can make it maybe some other people will too.” 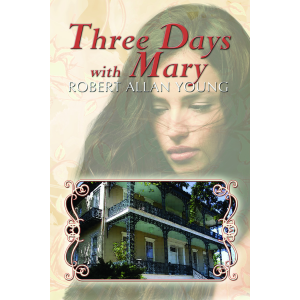