Longtime local Darien resident, Yale Jaffe, grew up on the southeast side of Chicago in the shadow of the Skyway. He developed a love of basketball watching the “ancient” Bulls’ teams with players such as Norm Van Lier, Bob Love and Jerry Sloan. He practiced his game in Stoney Island Park and other places in the city before finishing high school in the south suburbs.

Although never a varsity player, Yale pursued his love of the game in the intramural leagues in high school and at the University of Illinois in Champaign. During college years, he lived across the street from the then-called IMPE (Intramural Physical Education) Building and was a basketball gym rat. While still an undergraduate, he began refereeing dorm and fraternity basketball leagues to earn expense money on campus.

After graduate school, Yale continued to play for about twenty years in local men’s leagues with the Darien Park District, the YMCA, and in local health clubs. He coached his sons when they were old enough to play in recreational leagues. As his sons were winding down their participation in basketball, Yale’s playing career also was coming to an end. On a suggestion from a friend, he rediscovered refereeing as a way to stay connected to the game.

For the past sixteen years Yale has officiated high school basketball in the west and south suburbs of Chicago. Although he did not play varsity basketball, he believes in the importance of high school sports (including intramurals) in developing young people with life lessons such as work ethic, commitment, exercise, teamwork, unselfishness and sportsmanship. Learning to compete fairly while abiding by sports rules are transferable skills, which contribute to the success of young people’s futures. Yale believes that it is no accident that more women participate in leadership positions in business and politics since their inclusion in Title IX regulated sports opportunities.

Becoming a high school basketball referee requires commitment and discipline as well. Referees attend summer evaluation clinics and pre-season association meetings to continuously improve their skills. There is a natural progression in the high school ranks from working freshman games through sophomore to varsity, and finally, to working state playoff games. Yale calls these commitments part and parcel of his ultimate “love of the game contract”. Taking heat from upset coaches and parents, occasional disrespect from an adrenaline-filled youngster, or driving 50 miles to a far-away school in a blinding snowstorm are far outweighed by the joys this avocation has provided Yale. He has met hundreds of referees whom he now calls friends. The referee community is close knit group- on the basketball court; your partner might be your only friend in the gym. Beside the exercise and being part of something wholesome, most official’s associations sponsor social events to encourage and foster these friendships.

About three years ago, Yale began thinking of writing a book to recount various interesting, surprising stories and anecdotes that happened to him or some of his colleagues. As an example, Yale once wrote up a high school coach for an IHSA good sportsmanship award, which he thought was earned by a particularly intense teacher with a rough reputation. His team lost a closely contested game, and the coach focused solely on his team, uncharacteristically leaving the referees alone during the game. After submitting the award nomination, Yale found out that on the night of the game the coach was suffering from laryngitis.

Instead of publishing these kinds of anecdotes in a collection, Yale decided to incorporate these stories into a novel to highlight the positives and negatives of high school sports, and to encourage a discussion with people interested in young athletes.

The book, Advantage Disadvantage, is a novel, which explores the corruption of the adults surrounding a high school basketball prodigy set in Chicagoland. It is told in a who-done-it style and is classified on Amazon.com as a Sports Novel. The book gives the reader an inside view of high school sports as told through the eyes of a referee. A sleazy neighborhood bookie recruits a “helper” in the book to try to fix the betting on a high school game. Each of the participants’ motivations and value systems are examined: parents, players, coaches, gangs, referees, sportswriters, and college recruiters. Advantage Disadvantage takes its name from the philosophy in basketball refereeing which states that only the fouls and violations that materially change a player’s advantage (or disadvantage) should be called, not everything in the rules book. In other words this philosophy espouses the spirit of the rules book, not the letter of its laws.

It is the hope of the author that this book stimulates a dialog between players, parents, sports lovers, and mystery readers about what is right and wrong in high school sports. The book might bring the reader to tears – of joy, anger, surprise, and maybe even laughter. It is offered on Amazon.com and other online bookstores. Yale welcomes your feedback at advantage.disadvantage@gmail.com , or of course you can just shout something out to him when he’s working a game in your gym!

From the Chicago Tribune. 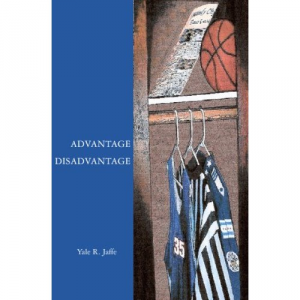