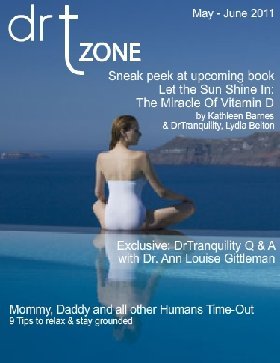 BIO
DrTranquility-Lydia Belton,is a mental health expert with a background in Relaxation Physiology for Mind-Body Medicine from Harvard University's Mind- Body Institute, and Columbia University's Rosenthal Center in Botanical Medicine. She worked as an early response therapist for the International Red Cross during 911 in NYC, and is very active in working with out reach programs and organizations as she has done for many years, one of her favorites, the steering committee for the Children's Museum of Manhattan. Lydia has helped numerous people address P.T.S.D.(Post Traumatic Stress Disorder),Anxiety Disorder,Phantom Limb Syndrome and bereavement issues. Through the platforms of her fm radio show, (where more than 200,000 listeners turned on their radios & adjusted their dials to hear DrTranquility Talks live each week),and through her other platform B WELL TV, her production company, and of course her popular wellness website DrTranquility.com(with a substantial membership base with her affiliate lists acquired over a decade), she has worked with through promotion and in some cases has also interviewed countless healers in New York City, LA, London and from around the globe. Many of them are New York Times best-selling authors, including: Louise Hay,Dr. Wayne Dyer Ph.D.;Dr. Laurie Nadel,Ph.D.; Dr. Fred Vagnini,M.D.; Dr. Joseph Mercola,M.D.,Dr. Hyla CaasM.D. and Eldon Taylor,Ph.D.These interviews can be found on DrTranquility.com under Dr.Tranquility Talks on fm.

Lydia/DrTranquility is known for her exclusive B Well TV productions which have aired on Current,and various Internet TV platforms, including on the B Well TV channel. These combined networks reach of over 139 million viewers around the globe. These productions have featured famed shoe designer Jimmy Choo on Qi Gong(now D'ato Jimmy Choo OBE); the exclusive Dorchester Spa in London; and filmed The Champion Trust production to be released later this year. The trust founded by Bob Champion MBE,the Grand National award winning Jockey who was diagnosed with prostate cancer in 1979 two years prior to his legendary win. The Bob Champion Trust are leaders in procuring funding for prostate cancer research. B Well TV was blessed with unparalleled access to the Bob Champion Cancer Research Unit within the Royal Marsden NHS Trust Hospital in Sutton, Surrey. For this we are eternally grateful to be in a position to share this upcoming piece with you. DrTranquility's expert protocols have been featured in magazines such as Cosmopolitan, REDBOOK, and British Glamour. She has written numerous columns for both national and international magazines& has appeared on The View, ABCNEWS.com, iVillage, and as an expert for Fox 5 Good Day, KISS-FM, and WOR-FM. In addition, she has been interviewed by many media personalities,such as Michael Baesden and Meredith Viera.

Dr.Tranquility,Lydia is currently releasing a book with co-author Kathleen Barns on the importance of Vitamin D.This is especially important to Lydia for women of color,(and you know who you are...everyone from slightly off white to the the deepest black, including Asians & Hispanics) tend to be deficient in levels of this vitally important vitamin, often due to cultural standards). Let go of the umbrella...and for just a moment, " Let The Sun Shine In." Isn't your wellness worth it?
Let The Sun Shine In available in a unique format on drtranquility.com. For information: please visit DrTranquility.com and click Let The Sun Shine In! 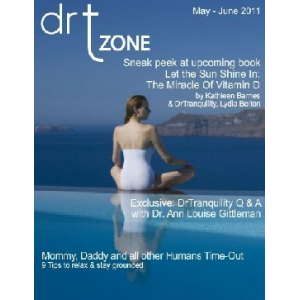 Dr T Zone with a free chapter of Let The Sun Shine In:The Miracle of Vitam...