Mother and daughter screenwriting team Janet and Laura Greenwald, have been helming The Next of Kin Education Project since 2002. NOKEP began after Janet’s mother Elaine Sullivan died at the hands of a Chicago hospital due to massive negligence. The hospital failed to notify them that Elaine had even been hospitalized, for days. By the time they were called it was too late, and Elaine died unnecessarily and alone. After discovering that there were no laws regulating next of kin notification in Illinois or California, even if the patient is unconscious or is unable to communicate, the duo created and enacted three Next of Kin Laws in both states.

Janet and Laura then joined forces with medical experts to create Notify In 7 which gives hospitals the tools they need to perform NOK notifications quickly and easily in almost any situation. Using what they had learned through NOKEP, they created the Ready In 10 Get Ready Kit and Don't Lose All Your Stuff At College, to help families and college students locate and compile their vital documents, contacts and emergency medical information into a Grab and Go format, they can take with them at a moment's notice. 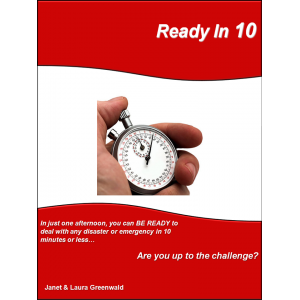 Ready In 10 Get Ready Kit