Author, columnist, teacher, lecturer, past president of three advertising agencies, William R. Park, Sr. has served as a consultant to some of America’s largest and most successful companies.  As a nationally known and respected advertising executive for forty-two years, he has written thousands of newspaper/print ads and TV/radio scripts.

Winner of national awards in print and television, his popular ‘Ad Pulse’ monthly column appeared in Modern Retailer Magazine in the ‘70s and again in Publishers’ Auxiliary in the ‘90s.  In addition, articles have appeared in Editor & Publisher, The Best Times Magazine, Route 66 Magazine, Atlanta Journal, Kansas City Star, and various daily newspapers.

He has authored the acclaimed Franciscan Trilogy. Overlay and its sequel, The Dacian Resurgence, both suspense-thrillers, were read and reviewed by two bestselling authors who compared the tomes with the best work of Ludlum and that of the works of Cussler and Clancy.  The third novel in the suspense-thriller genre series Sacrificed is complete as well as the fourth, Carpe Diem (Seize the Day).  This Time It’s Personal, the fifth in the series is being written.  Recently released COMA, a suspense-thriller, outline-synopsis was reviewed by two bestselling authors: F. Paul Wilson wrote, “Very high Concept.” James Rollins wrote, “Sounds very intriguing—run with it.”  Midwest Book Review wrote: “Think Bourne, or the Bruce Willis version of The Jackal, then multiply by ten and you’ll have an idea of what the movie version of COMA would be.”

A Jack the Ripper spin-off mystery set in 1889, Fatal Incision, is complete—and its sequel, Phantom Hounds is in the works.  Mummies & Murder on Route 66 and The Talking Stones are two more mysteries in production.

Bill lives in the Kansas City area with his wife Genie, a high school English teacher who edits his manuscripts—and a very affectionate cat named Gabby. 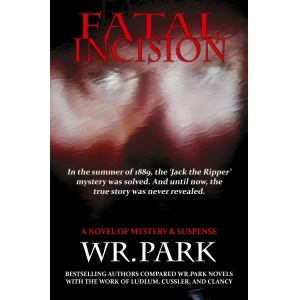