Anthony Wayne (or A. Wayne) is my pen name and the names are in fact my middle names. I was born in a small town in Nova Scotia, Canada near Halifax and grew up with three older brothers. Both of my parents were ministers at various times in their lives and my oldest brother was also a pastor for some time. Growing up in this environment, it was just expected that I was to be a Christian too. Although I did consider myself one, by the time I was 20 and on my own, I had stopped attending church and stopped really spending much time at all working on my Spiritual side. If someone asked me if I was a Christian, I'd affirm that I was, but looking back now, I was most certainly not and perhaps had never truly been. It was only when challenged by my then girlfriend about hell that I truly started to question this doctrine. Very shortly into my research, I came across the term "Universalism". I was stunned by the fact that Universal Salvation actually had Biblical backing and no one ever told me about it. I read book after book, wanting to know more and more about it. After reading a few books I started reading my Bible a lot more. I read books such as Rob Bell's "Love Wins", Thomas Talbott's "The Inescapable Love of God" and Gerry Beauchemin's "Hope Beyond Hell". While the books I read gave me direction, I felt that none of them said quite what I felt the Bible was telling me. So, I decided to write my own book which eventually was to be called "Hell and Eternity - It's all Greek to me". Writing a book is a unique experience when writing about your faith, because you'll find yourself writing things and making connections you had never even thought of even as you are writing them. My family was very supportive of my beliefs and my book. My father said "there's nothing in there that offended me". It was very surprising that my 60-something parents, both Christians since they were teenagers, would be so open to these beliefs. My father also said "I've always had a problem with hell. I don't care how many sins you commit in this life, eternal punishment is unjust". I have been very lucky to have such a supporting family. Some of my brother's are slightly less agreeable, although they certainly don't call me a "false teacher" or a "heretic" and were all excited to hear about my book. Some of my other beliefs (which will surely turn into books) are that Christians are called to live modestly and that we should not support unfair or forced labor, either directly or indirectly. As an animal lover, I believe in the eternity of animal's souls (and find very strong Biblical support for this). My stance on homosexuality is no more rigid than my stance on eating pork or shellfish or having tattoos (in fact I have two of them). My hobbies include writing (no surprise there), reading, playing card and board games with friends, watching movies, and exercising (which I've been doing for over 6 years). I still reside in Nova Scotia, although not in the same place I was born. I am also currently studying for ordination as a minister under the Christian Universalist Association (CUA). For more info, please visit my website at http://www.anthonywayne.net 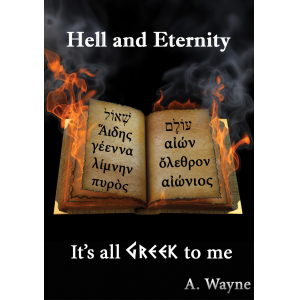 Hell and Eternity - It's all Greek to me