A farmer’s son born in the heart of Gloucestershire, Antony Curtis was expected to follow the family tradition. Instead he enrolled in the Army in a tank regiment.

From a young child he was “hooked on space” and would spend many hours peering at the galaxy through his beloved telescope. It was whilst in the Army that he developed his writing abilities; following which he took up martial arts and reached the rank of Black belt within two years of enrolling. He then changed paths again and went on to teach karate as well as working as an Engineer.

His first marriage didn’t work out but, as in life some good always comes out of bad, his divorce led him into another sphere, and his evolving faith in all things spiritual has become a very important part of his life. This is reflected to a large degree in his writing, which he began in earnest during this period of his life.

Now, happily settled with his second wife, with her encouragement he plans to devote more time to writing about the topics with which he has always been fascinated. The sequel to this first book is already completed under the Title of “Universal Fighter, Revenge of the Damned”, and he has yet a third in the offering. 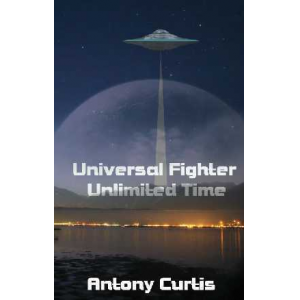