B.C.CHASE was born in Wichita, Kansas in 1984. Piano lessons began at age five, but his habit of arranging the harmonies to his taste rather than reading the music confounded his teachers then and thereafter. His parents' work as missionaries took him to Turkey at the age of seven. While living there, he began a life-long love affair with computers and began to use them in the orchestration of his compositions. He also wrote his first book, Leviathan. He moved to Germany for education in 2000 and became deeply interested in European history-specifically about World War II. In that same year he began work on the novel Paradeisia. Still a busy composer, he completed his first symphony in 2003. Wishing for a sunnier climate, he settled in Florida. Here, he completed work on a screenplay, Through Glass, in 2006. 2008 saw his marriage to a beautiful girl from an island in the Lesser Antilles, Dominica. He finished a fantasy epic called the Story of Santa Claus in 2008. Seeking to undertake a serious study in anthropology, he researched and wrote the nonfiction book The 2010 Thesis. He completed a theatrical dramatization of the birth of Christ with 16 major musical pieces in 2012. 2012 was also the year he and his wife brought home their son. His work on Paradeisia did not cease through all of this until, in 2014, he published the first part of the novel, Origin of Paradise, to instant success, reaching the top twenty on Amazon's science fiction bestseller list and the number two spot for genetic engineering on the same day of release.  It then proceeded to occupy the #1 bestseller rank for genetic engineering and the #1 bestseller rank for technothrillers.Fiction:LeviathanThe Story of Santa ClausThrough GlassParadeisia: Origin of ParadiseParadeisia: Part TwoParadeisia: Part ThreeNonfictionThe 2010 ThesisVarious Essays 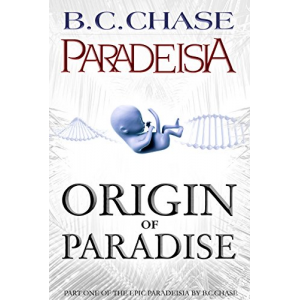