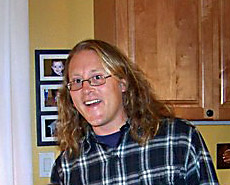 Edgar Swamp's stories have appeared in Death head Grin, Macabre Cadaver, Alienskin and Urban Reinventors. The Gyre Mission is his first published novel. He enjoys watching people squirm when they read his work, laughing aloud as they try and claw their own eyes out... 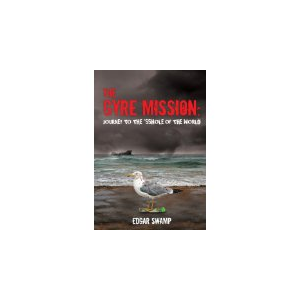 The Gyre Mission:Journey to the *sshole of the World

1. Could you tell us a little bit about yourself?
I have been writing seriously for the last ten years, and although The Gyre Mission is my first published novel, it is the fifth one I've written. My short stories have appeared in Alienskin, Macabre  Cadaver, Death Head Grin, Urban Reinventors and The Far Side of Midnight. I was living in San Diego when I wrote the book but have recently relocated to Madison, Wi. Prior to being a writer I was a touring musician in various rock/metal/grunge bands. After living in one van too many I decided it was time to settle down and channel my creative energies into a craft that wasn't as self-destructive.

2. Describe your book ‘The Gyre Mission:Journey to the *sshole of the World’ in 30 words or less.
This is first and foremost a survival story, set on an island of garbage in the middle of the north Pacific gyre. Horror/satire at it's finest.

3. What was the hardest part of writing your book?
Since I knew I was going to publish this book, the hardest part was accepting a finalized product from myself. I rewrote it no less than nine times; every time I went through it I knew I could do better and so it wound up taking me three years from start to finish. It was worth it though, as I learned many things during the process that made subsequent efforts much easier.

4. What books have had the greatest influence on you?
Stephen King's The Shining, Chuck Palahniuk's Fight Club, Brett Easton Ellis' American Psycho, Tim Dorsey's Florida Roadkill and Carl Hiaasen's Sick Puppy.
5. Briefly share with us what you do to market your book?
I initially hired a publicity company called Author Marketing Experts to get the ball rolling and did a three month campaign with them. On their advise I started a blog on wordpress and am working on my following, writing mostly humorous stories about the various jobs I've had throughout my life while making the time for my creative efforts. I have pages on Facebook, Goodreads, Librarything, Nothing Binding, BookBuzzr, and Authonomy to name a few. I did several book giveaways on those sites and ran regular ads on Facebook and Goodreads. I submitted the novel to Kirkus Indie Reviews and got a very favorable review from them that I use on all the sites. I've submitted queries to more sites and blogs than I can remember, soliciting reviews, and got a great one from bibliobabes.ca, a horror site based in Canada. I've submitted copies of my book to libraries in San Diego and Madison, and I most recently hired Combined Book Exhibit to display my novel at the International Book Fair in Frankfurt, Germany. All of that said, I still feel as if I've hardly scratched the surface!
6. How do you spend your time when you are not writing?
While I wrote The Gyre Mission I worked as a dog walker/pet sitter in San Diego. It was my business so I was able to make my own hours and tailor it to my writing needs. In my spare time I wrote and recorded songs I posted on myspace and gave to my friends. I recently moved from the west coast to the Midwest to continue my education and spent the summer breaking my back working for my brother in law's landscaping company, the hardest work I've done in years. I am looking forward to beginning classes!
7. What are you working on next?
I've just completed the first draft of my new novel 'Denied'(working title; subject to change), a novel about the American health care system in the future. It follows the misadventures of a health insurance claims investigator, a hired assassin whose job it is to 'process' insurance claims with a .45. Again, this is horror/satire; cringe-worthy and funny all in one package. Look for it in 2014!