I am a teacher by day and children's book writer by night [well, when I have time]. It has always been a passion of mine, but became active when my own two children were younger and demanded something interesting to listen to and read. This book is the first of a series of 'Paperbat adventures'. I live near a beautiful local park, and one day when walking with my sons, we saw a piece of newspaper blowing around in the wind ......... 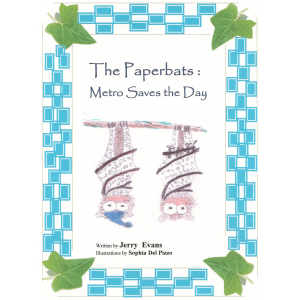 Paperbats 1: Protectors of your Local Park

I am a teacher, a profession that is very fulfilling. Living in is very hectic and busy, which can be both an ideal environment to write, but also a distracting one. Since I was a teenager I have found the world around me stimulating for short stories for children and in particular sparks many story ideas. Yet it was not until I became a father to two sons that I started to more formally write my stories down for others to read. I have been involved in conservation of wildlife for many years, travelling to countries such as , and , helping lemurs, fruit bats and the infamous Komodo Dragon. But of course it is the fruit bat conservation that I have become most involved and has been a big reason for writing my Paperbats books, for which any sales go to their conservation.

Describe your book ‘Paperbats 1: Protectors of your ’ in 30 words or less.

This first book describes family of creatures known as Paperbats, and how a young boy called Jack discovers these special secretive creatures in his local park. In the latter part of the story, Grandpa Times tells young Sunny [and the readers] how the Paperbats became made of paper.

I created and told my stories to my children over many bedtimes. They are a very tough and critical audience to please. Any faults, mistakes or monotony were quickly pounced upon and they made me change. Many stories have sunk, maybe never to rise again! However they also gave me ideas to add such as the pictures and colouring, so my ‘critics’ have been very useful. I think all authors should have an initial ‘sounding board’ for their book story ideas’.  The hardest part to writing a book is not therefore the story itself, but the need to persevere with its final completion and publishing. This is a very tough road and in my own case took several years – that’s another whole question in itself with many different responses from your authors!

As a child, adolescent and adult we read so many different books, whether for pleasure, work, education. Many influence us in different ways. But for me at age eight, Gerald Durrell’s autobiographical books instilled a love a reading, animals and conservation into me.  And at around 12 years old I remember being engrossed in the works of C.S. Lewis. Finally over more recent years when reading stories to my children, I found a lack of appropriate stories for 4 -7 year olds, and to my surprise the popular Wombles stories were out of print. So I made stories for my children which were ‘Womble-like’ in their wholesome nature.

I have been taken aback by the positive response for this first book over the past few months since I promoted the book. I initially created a website where I highlighted the Paperbat books and characters, using amongst other things the cleverly designed and user friendly ‘bookbuzzr’ widgets developed by Freado.com. I have recommended them to several budding authors for marketing. I published the book via smashwords [with its links to Amazon, ibook, Barnes & Noble], and offered this first book free, to get interest, before now charging a small amount for the second book. I have had several thousand downloads via several book publishing sites.

I enjoy my work teaching, which gives me pleasure seeing students discover and learn new things. A child’s mind is so creative, and I sometimes feel our world bashes these fresh and creative ideas out of us as we get older. I also enjoy travelling, from which gives me story ideas, as around the world tails from many cultures can be so enlightening and enjoyable. Finally I am involved in several animal conservation projects – fruit bats, to be precise. I have been associated with the Durrell Trust, which is a world leading conservation zoo on the , off the south English coast. I have taken part on conservation projects in areas such as in the , where the local endemic species of fruit bats live. They are very lovely creatures and also an important part of the local ecosystem. Yet they are being killed or dying from loss of habitat. Yet the animals are playful and each have characters, which is partly what gave me the ideas in the Paperbat books.

I have just finished my second Paperbat story book called ‘Metro Saves the Day’. This second Paperbats book and contains two more short stories for young children. In the first part, Herald discovers a fire, which is one the Paperbats greatest fears. With no park keepers around, the Paperbats try bravely to put it out themselves. Fortunately, Metro has invented something that can help. The second part sees the young twins, Metro and Tel, belatedly looking for a birthday present for their dad, Herald. Yet such a simple plan sees them getting into lots of trouble. I have already written, although not edited, a third book of the Paperbat series with new adventures for the Paperbat family, which I will offer a introductory sample on my web site and via Freado.com in the coming months.