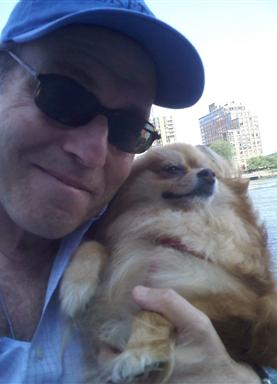 In a nutshell, I was born in New York City, and at the age of four my family moved to Purchase, a bucolic suburb about 30 miles North of Manhattan. This was a wonderful place to grow up! After high school, I went out to Tucson, Arizona to attend the University of Arizona where I graduated with a degree in Journalism. While I was out there, my family moved back to the city after having lost our home to eminent domain. Upon my return, I joined an advertising agency, and began a successful career that spanned many many years. In addition to being an award-winning copywriter, I developed marketing skills that led to my becoming an independent consultant. In my spare time, I dabbled as a toy inventor and developed two product lines that met with tremendous success. Then, after a long bout with cancer, my life went from the relatively ordinary to the extraordinary when I had my afterlife experiences. Today, I still reside in NYC, and I have a wife, two great kids, and the cutest dog in the world. 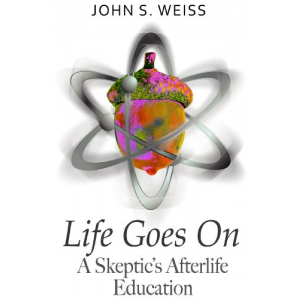 1. Could you tell us a little bit about yourself?
After growing up in Purchase, New York, I attended the University of Arizona and graduated with degrees in English and Journalism. Then I began a very successful career in the advertising/marketing business. During this time I also dabbled in the toy business and invented two lines of popular products. My life changed in 2007 when I had to fight an epic battle with cancer. While sitting for countless hours in chemotherapy, I became an expert at deep meditation, and that accidentally changed my life again. In 2010, after meditating myself to sleep, I slipped into the afterlife dimension and began a series of experiences that changed my perspective on everything. Since then, I have been attempting to market a book that chronicles all my afterlife events. Today, I live in New York City, and have a wife, two wonder children, and my first grandchild!

2. Describe your book Life Goes On, A Skeptic's Afterlife Education in 30 words or less.
My book chronicles a series of profound experiences I accidentally had in the afterlife where I learned a wide range of impossibly fascinating things.

3. What was the hardest part of writing your book?
My book was extremely easy to write. I had a vivid memory of all my experiences, including the dialog. The hardest part was getting myself to publishing it. After it was written, I was afraid that it would seriously tarnish my reputation and overall credibility. But several people convinced me to do it, and now I’m glad I did. I decided that if I could bring joy and hope to at least a few open-minded people, it would be worth it. Luckily, I’ve accomplished that!

4. What books have had the greatest influence on you?
The Catcher In The Rye, Portnoy’s Complaint, The Great Gatsby, Hawaii, The Longest Day, A Bridge Too Far, and so many others.
5. Briefly share with us what you do to market your book?
What works the best is contacting sites, magazines, and radio broadcasters that specialize in my genre. For me, social media has been a total waste of time. I’ve tried Facebook, Twitter, Reddit, Google+, and Pinterest, and all the results have been a joke.

6. How do you spend your time when you are not writing?
When I’m not writing I’m reading, going to movies, working on wood and metal sculpture, making leather belts, bracelets, and iPhone cases, taking very long walks, and playing with my new grand daughter.

7. What are you working on next?
I recently unearthed a lengthy series of limericks I wrote several years ago about angels for a jewelry company assignment. A good friend of mine read them and said they’d make a wonderful children’s book. So I hired a talented illustrator, and, currently, the art is about 80% completed. However, considering all the trouble I’ve had marketing my afterlife book as an indie publisher, I’m going to attempt to go the traditional route with the angel book. Self publishing is too frustrating and unrewarding.