Patrick Murray was pursuing a career in the Film Industry, before the life changing events that put him on the path that produced this book. Determined by the magnitude of what was revealed to him, that the world must be enlightened to its reality.  And despite the danger and obstacles he faced, embarked on the task, determined to see it through.  The Unwanted Companion, is an act of altruism from a courageous individual. 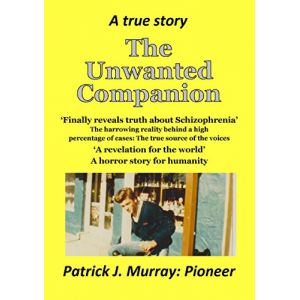 The Unwanted Companion: A True Story

1.  Could you tell us a bit about yourself ?
I am from Wales originally.  I am 48, and was pursuing a career as an actor/director, before i was put on the path that produced this book.

2.  Describe your book The Unwanted Companion, a true story, in 30 words or less?
Groundbreaking. Finally tells the truth behind what has long baffled Psychiatry.  And a confirmation, that we are not alone; and that unseen forces are at work, for good and bad.

3.  What was the hardest part of writing your book?
Writing and articulating it in the detail it occurred, unfolded: and was gradually revealed to me.

4.  What books have had the greatest influence on you?
Mainly books of a spiritual nature, as i searched for answers (and cures) for my own predicament, which in turn led me to India and beyond.

5.  Briefly share with us what you do to market your book?
Initially, i had been sending copies to prominent individuals in the psychiatric profession; and those involved in mind body and spirit.  And i am learning and finding my feet in this area to make people, the wider public, aware of it.  Because fundamentally, it is a book for humanity.

6. What are you working on next?
This was a one off project. Like the cross was place upon Jesus; this book was placed upon me.  In terms of discovery, its magnitude, and what it reveals, its an important book for the world, a story that had to be told.  Whether i ever write another book, i don't know.