​I was born and raised in Bryan, Texas a long time ago in a galaxy far, far away...

I started writing stories down when I was ten after one of my older sisters (thanks, Gari!) read an assignment I'd written for school and thought it was hysterical. I followed it up with lots of other stories, all of which have doubtless been reborn as wildflowers and trees after this many decades of decomposing.

Once I got a little adultish, I spent a few years bopping around; I lived in Austin, went to college back home, sweated out a summer doing summer stock in Seguin, TX, spent a year in Paris as an au pair, and finally moved to Los Angeles to break into the movies. The fact that you have seen me in exactly 0 movies should indicate my level of success at this.

I was more successful at computing, which I moved back to Texas to do and have been employed at for around a quarter century at this point. God, I'm old. Old and boring.

After the move back, I got together with my sweet honey​ and we had two little honeys of our own.

While my wife was pregnant with our firstborn, I had the idea for a unique and colorful blog that would be a way to introduce myself to the world and become a springboard for my writing to reach a wider audience. RPGs-a-plenty hit Blogger and I was off and running!

Oh, and at the same time, I started using Blogger to make a fun little blog in which I invented alternate histories and wrote flash fictions about them in a Today-In-History format. It was mainly a writing spur and a place to make outlines and notes about projects I wanted to flesh out later. I didn't plan to do anything much with it, but I made it public and gave it a cute name, anyway - Today In Alternate History - just because I thought it was fun.

Naturally, people noticed the one I didn't intend to do anything with.

TIAH was more successful for me than anything I'd written before or since, but it didn't exactly let me quit my day job. I handed it over to an Ascended Fan, who has, to be honest, run it better than I ever did, even if he did change my format to magazine-style.

Since handing over the reins to TIAH, I've been concentrating on novels and this whole ebook thing the kids are talking about these days. I have a friend who's doing quite well at this, and I have nothing but high hopes for my own future. After all, JK Rowling is only a month older than I am.

When you have a minute, ask me about the people who followed the path I blazed who are now WAY more successful than I am. Go ahead. I'm not bitter or anything. 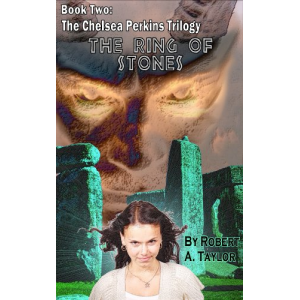 The Ring Of Stones (The Chelsea Perkins Trilogy) 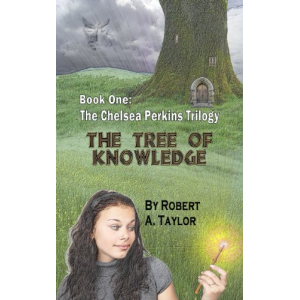 The Tree Of Knowledge (The Chelsea Perkins Trilogy)

1. Could you tell us a little bit about yourself?
I am a native Texan, married, with 2 daughters. I've been writing professionally for a couple of decades, from skits for an improv comedy group, to an educational film for the state of Texas, to my current novels. My day job most of that time has been helping people work with computers, which is someday going to be a book all by itself. I attended Texas A&M University and once studied with Pulitzer-Prize winner Charles Gordone. But, my biggest claim to fame is that I was in a report on The Daily Show (pre-Jon Stewart) where I spent an entire day roaming around the Texas Renaissance Festival with Stephen Colbert. In a Star Trek uniform. My life is weird.

2. Describe your book The Tree Of Knowledge (The Chelsea Perkins Trilogy) in 30 words or less.
Chelsea Perkin's estranged father crashes back into her life on her 12th birthday with the request that she kill him. And her life just gets stranger from there.
3. What was the hardest part of writing your book?
The hardest part of writing The Tree Of Knowledge was making sure the climax came out just right. The novel deals with prophecies and seers, so the threads all had to come together just as people had predicted.

4. What books have had the greatest influence on you?
The books that have had the greatest influence on me? Only one was an actual book. The writing that turned me into a reader was Fantastic Four #136. I remember this vividly as the first thing I read that made me want to read more. (Never underestimate the power of comic books, people!) The next greatest influences on me were a memoir and a novella. The memoir is Zen and The Art Of Motorcycle Maintenance by Robert Pirsig, and the novella is Rita Hayworth & The Shawshank Redemption. I read these two things back to back, and they taught me the value of patience and perseverance - something every writer needs to know.
5. Briefly share with us what you do to market your book?
I market through social media, Facebook, Google+, and Twitter. I also use BookBuzzr (of course!) and have dabbled in Bargain Booksy and Indies Unlimited advertising. I also have a web page, http://robbietaylor.net,​ where I blog and post announcements about my upcoming work. I also try to participate in discussions on writing forums. I need to do more, but there aren't enough hours in the day.

6. How do you spend your time when you are not writing?
I have two small girls, so I spend a lot of time making sure they're happy. My wife, for some reason, likes to have a social life, too, so we spend our weekends playing table-top RPGs. This last month I also foolishly decided I had enough free time to get in a local play, so I'll be doing that the next couple of months.

7. What are you working on next?
I finished up the sequel to The Tree Of Knowledge, The Ring Of Stones, and put it up for sale in December, so now I'm trying to finish the trilogy with The Circle Of Time. In addition, I have a collaboration with mystery author George Wier called The Vindicators, a science fiction series that we're creating. Also, I have an alien apocalypse/rapture novel coming out in August called Elbies, which is currently being serialized on my web site. In my laughably small free time, I work on other projects that will be finished when they're finished.