Wambui Bahati is an inspirational and motivational speaker, author and entertainer. She began her formal theatrical studies at New York University School of the Arts and made her professional theatrical debut in Godspell at Ford's Theater in Washington, D.C. She went on to perform in the Broadway productions of Godspell and Jesus Christ Superstar.

Wambui's regional and touring credits include starring roles in The Magic Show, Joseph Papp's rock version of Two Gentlemen of Verona, Little Ham, Nunsense, Don't Bother Me, I Can't Cope, Gone With the Wind –the musical, The Wiz and Crowns.

Wambui wrote, produced and stars in the one-woman musicals Balancing Act and I Am Domestic Violence. Both of these shows have received national acclaim for the unique way that they provide outstanding entertainment while dealing with important issues in our communities.

Named John Ann Washington at birth, Wambui Bahati is her new legal name taken on during the "reinvention of herself." In Swahili Wambui means "singer of songs," Bahati means, "my fortune is good." The native North Carolinian lives in New York City and is the proud mother of two adult daughters. She is the author of the highly acclaimed, tell-all, autobiographical self-help book, You Don't Know Crazy - My Life Before, During, After, Above and Beyond Mental Illness and the soon to be released 'They' Are Not Going To Save Us - 10 Ways to Love Heal and Save Ourselves.

Her passion: "Reminding You of Your Magnificence." 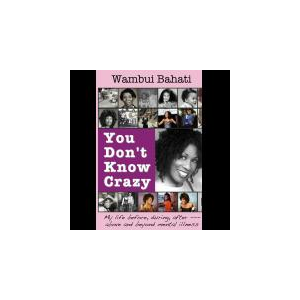 You Don't Know Crazy - My Life Before, During, After, Above and Beyond Ment...