How to Guides
VikramMarch 13, 2014December 23, 2014
A few days ago, we enrolled our book – 2014 Facebook Marketing Guide for Authors – onto the KDP Select program. This would give us 5 KDP free days during which time we could promote our book and achieve our goal of reaching out to more authors.

We decided to set the dates between March 11th and March 15th 2014 as our KDP free day period. Partly because of constraints of time and partly because we wanted to ‘eat our own dog food’, we decided to rely primarily on Facebook marketing to bring up our numbers.

We also sent out about 100 emails to authors who had shown an interest in the ARC’s of the book. These emails would have also had a substantial impact on the ranking of the book. Best selling author Libby Hellmann also made a post titled ‘BookBuzzr Facebook Guide is Really Good’ on GoodReads which may also have played a significant part in our results.

The net result was that within 2 days we got a #1 rank in the Amazon store in the fairly competitive ‘Advertising’ category giving us much needed visibility with authors. 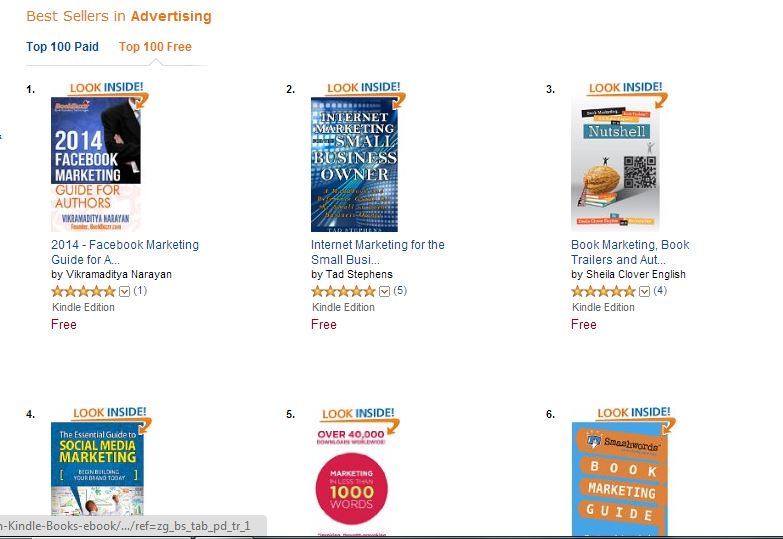 The rest of this post analyzes what we did so that you can attempt to replicate our results with your own book.

Here are the types of ads we setup:

For the KDP Free Day, we first set up a post using the following steps:

First we went to the Power Editor (https://www.facebook.com/ads/manage/powereditor/). Then we went to the ‘Manage Pages’ section in the drop down menu.

There we clicked on ‘Create Post’ and followed the onscreen prompts to create a new post and chose the ‘This post will be used as an ad’ option. 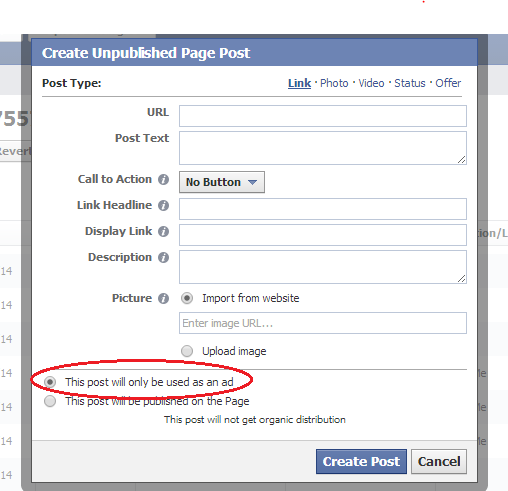 This resulted in a post that listed with a half-moon beside it. 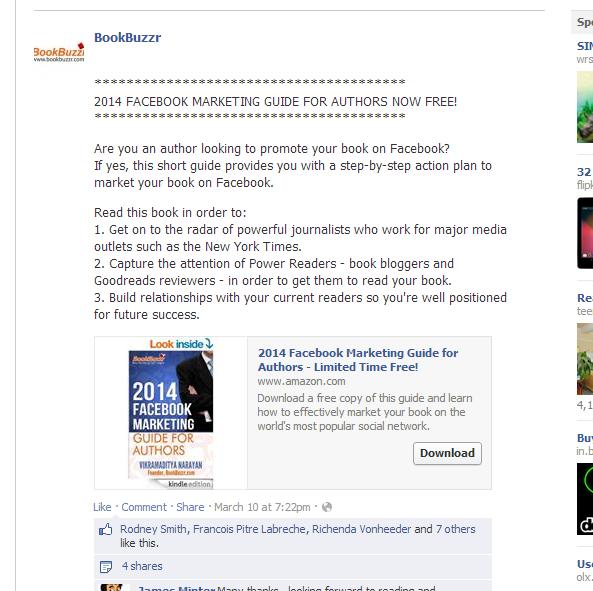 Next we navigated back to our ads interface by clicking on our account number on the drop down on the top left: 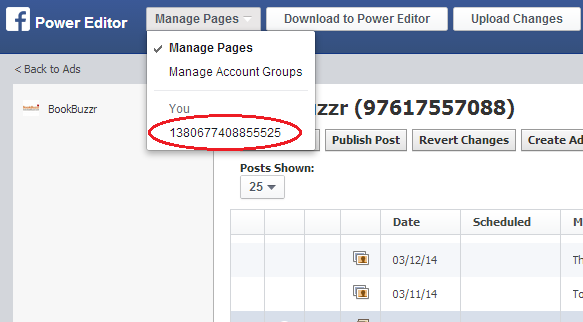 There, we created a new campaign called ‘KDP Free Day Dark Post US, UK and Canada’ and an ad under that campaign (note: we usually set up one ad under one campaign because of the way Facebook handles your ad budget.)

We set up a life time budget of $50. Initially, we made a big mistake with our targeting and clicked on a suggested audience called ‘Self Publish and Be Happy’. After a day, we realized that this audience was not actually not authors and was completely unrelated to publishing. This may have made our cost per click more expensive than needed.

We also went against our own advice in our book and targeted over 540,000 people (in our book we suggest that you don’t target more than 5,000 to 10,000 people with each ad. Our ad targeting details were as under:

We also played around with different pricing models and finally settled on a bid per click at 80 cents per click.

The results were as under:

1. The mistake that we made initially by targeting the ‘Self-Publish and Be Happy’ audience.

2. The fact that our audience size was really large at over half a million people!

3. Some other error in our targeting.

We also promoted the exact same post to a ‘Custom Audience’. This is a list of email users of BookBuzzr authors. In this case, because we knew that the size of our audience was capped at just 2,800 Facebook users, we decided to opt for the CPM (cost per thousand impressions) model. 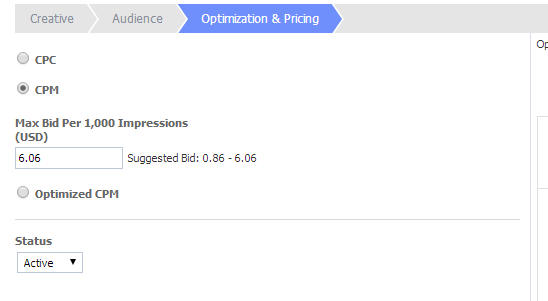 These ads performed far better than the other ads. We had 23 Unique Clicks and over 31 clicks. Again, we’re guessing that most of the people who clicked through ultimately downloaded the book.

And we spent just under $3 to get these clicks.

3. Ad on Right Side of Page (Failed and Stopped)

Again, we went against our own advice and set up an ad on the right side of the page. This was a complete disaster with thousands of views and very few (nearly zero) clicks. We were not spending any money but we were also not getting any results. So we abandoned these ads within a day.

We also made a post on our Facebook page when the book hit #2 on the charts thanking them. We pinned this to the top of our page. 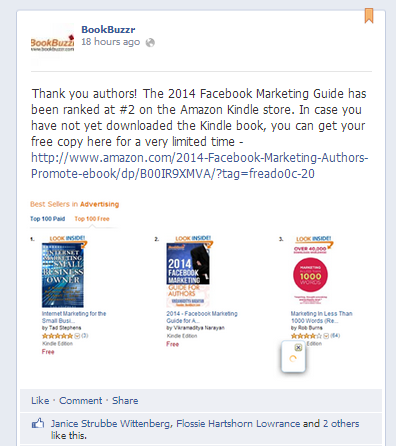 But this time we took our own advice and did not use the ‘Boost Post’ feature. The primary reason for our decision in this instance was that we could not advertise only to the authors who had liked the BookBuzzr page. Instead Facebook was forcing us to advertise both to our authors and their friends who may or may not be authors. 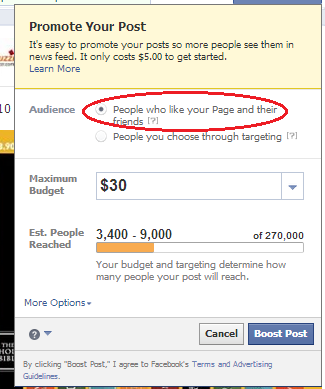 So we advertised this post by going back into the Power Editor, creating a new campaign and choosing the page post engagement feature. 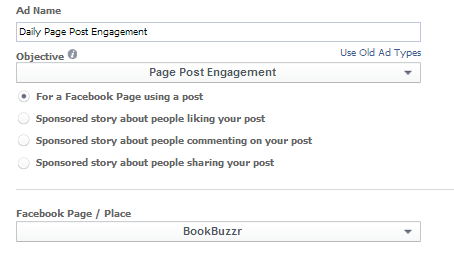 This has given us about 6 unique clicks for a total spend of $2.62 and will probably continue to help our cause over the next 2 days.

Overall, we feel pretty good about having achieved a number one ranking on Amazon with less than $80 of ad money spent and a little elbow grease.

We still have not gone out and contacted group members on Facebook informing them about the availability of the book. We’re hoping to do that today. Of course it will be harder to document the results as we will not be able to track the clicks.

Thanks again for your support.

In case you’ve not already done so, you can get a copy of the book for free for the next 2 days on Amazon here: http://www.amazon.com/dp/B00IR9XMVA/?tag=freado0c-20 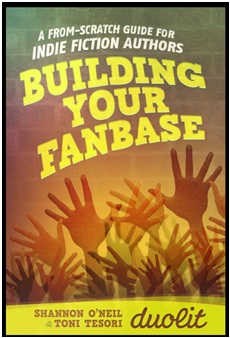